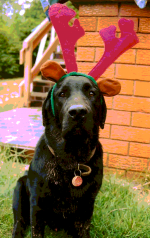 I cannot believe that it has been a year since Lindy and I moved to Canberra. Where did the last 12 months go? We are still discovering new walking routes  and meeting new friends.

Some of this year’s highlights are:

Last Sunday, I finally went to my first ever triathlon as a spectating Guide Dog. At 4:30am when all hard working guide dogs are having their well-earned sleep, I was woken when Lindy got up to get ready for the race.

As Lindy left for the race, she said something about Aunty Karen coming to pick me up. I promptly went back to sleep, as I knew it would be a long day! True to her word, Aunty Karen came by a few hours later and took me to the Commonwealth Park.

The place was buzzing with excitement and there were lots of other supporters cheering on their friends and family members.

I managed to see Lindy coming back to the transition zone with her pilot Kerry Knowler. The transition zone has 6 steps, which they have to take their bike through. As Lindy cannot see steps they had to slow down! She finally got into her running shoes and took off for the 21.1 km run guided by Jane Grey.

Lindy estimated that she would take well over 2 hours to run that distance. No sooner did I settle down for a nap, everyone was yelling out Lindy’s name. I got up just in time to see Jane and Lindy run past. They passed me 4 times in total! I later learnt that it was a 2-lap course, going out one direction then back and out in the other. It was great for the spectators but not much good for a guide dog who wants a nap!

The FIT cheer squad was awesome. After Lindy passed me a couple of times, I gave up trying to nap and got into the spirit of cheering. I was real proud of Lindy when she came into the finishing straight. Lindy crossed the finish line in 5 hours 3 minutes and 6 seconds. The finishing area was so crowded that I had to wait a while before I was able to give her a big congratulation lick.

Lindy told me that all the spectators, volunteers and fellow competitors were very encouraging along the way. This helped make the race such a positive experience for everyone.

I think I should tell you that the Canberra Half Ironman ended up being a Duathlon with a 4 km run, 85.5km cycle and finishing up with a 21.1km run. This was because the swim leg was cancelled due to Lake Burley Griffin being closed through flooding.

Huge thanks must go to Lindy’s three guides for the race, Rosemary, Kerry and Jane. Jane for guiding, encouraging and ‘pushing’ Lindy through the runs, Kerry for stepping in at the last minute and getting them a fast time on the bike, and Rosemary who was going to swim with Lindy as well as the backup for the bike leg as well. Thanks also to the FIT cheer squad and the FIT crew at the recovery food tent.

The best part of the day was the recovery session. The fruit salad and ice cream from the FIT recovery tent, more than made up for the Mara-bone that I could not find.

Lindy has been invited by the City of Sydney to be one of the Ambassadors for the City of Sydney Chinese New Year Festival. One of her main duties will be to perform the “Eye Dotting” ceremony and the blessing of the waters before the start of the Dragon Boat Races on the 12th February 2011.

Lindy will be “awakening” the dragon, by dabbing red paint on the eyes of each of the dragon boats. My Guide Dog duty does not extend to finding Dragon’s eyes, so don’t hold me responsible if the Dragons look half asleep because Lindy misses some of the eyes!!

The New Year Festival begins with an exciting launch at Belmore Park on Friday the 28th January, where Lion and Dragon dances, along with firecrackers, will farewell the Year of the Tiger.

Then on Sunday 6th February, the Chinese New Year Twilight Parade will be a dazzling spectacle as it makes its way from Sydney Town Hall to Chinatown, with the evening ending with a special Chinese New Year fireworks display at Darling Harbour. This year’s parade will welcome in the Year of the Rabbit with a message of peace, beauty, endurance and hope.

I Wish you Enough

I wish you enough sun to keep your attitude bright no matter how grey the day may appear.

I wish you enough rain to appreciate the sun even more.

I wish you enough happiness to keep your spirit alive and everlasting.

I wish you enough pain so that even the smallest of joys in life may appear bigger.

I wish you enough gain to satisfy your wanting.

I wish you enough loss to appreciate all that you possess.

I wish you enough hellos to get you through the final good-bye.

For my four-legged friends

I wish you enough bones to keep your teeth nice and healthy.

Remember: “If you are not enough without it, you will never be enough with it”