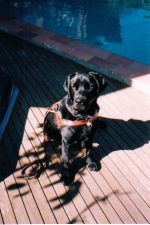 It is now 18 months since Lindy and I moved to Canberra and we have finally settled into our new Town House at Jinka Street, Hawker.

I was a little sad about moving away from Chewings Street as the street name was so appropriate for a Labrador Guide Dog to live in. The positive side of the move is that this new place has a lock-up garage and a nice covered area in the back courtyard. I no longer have to share my lounge room with two tandem bikes and two indoor trainers. When Lindy goes out for one of her crazy five hours ride, I can curl up nicely & snooze in the back courtyard no matter what the weather brings!

Where did the last six months go?

Lindy got shingles in the middle of January just as she was getting into the swing of triathlon! I never knew much about this condition until Lindy got it. However, the doggienet, which is the K9 version of the internet, certainly gave me some insight into the condition.

This is a chickenpox virus & my K9 friends told me that I wouldn’t catch it. People who had chickenpox as a child will always have this virus in their system. Later in life, something may trigger it off and the virus resurfaces. It could take a couple of weeks or even up to a year before one is fully recovered.

Lindy has been taking things a bit easy the last few months and trying to give her body a chance to recover fully. The doctor said she could exercise and to just make sure she doesn’t over do it! So she has been doing about a quarter of what she used to and with very little intensity!

I certainly benefited a lot. Instead of her spending hours on that  “cement mixer”, otherwise known as the indoor training bike, she took me out on lots of long walks.

Ambassador for the City of Sydney Chinese New Year Festival

Lindy fulfilled her Ambassador duty by performing the “Eye Dotting” ceremony for the Dragon Boat Races.

Lindy did “awakening” the dragon, by dabbing red paint on the eyes of the dragon boats. My Guide Dog duty only required me to take Lindy to the boat and it was left to Tessani, Lindy’s great niece, to help her paint the dragon’s eyes. They must have woken them up all right, as I saw those dragon boats charging up and down Darling “Harper” with loads of paddlers onboard. SBS World News filmed the ceremony. I looked real handsome on it!

Apart from the Dragon Boats race, we attended the “Stories East and West” at the Belvoir Theatre. It was a story telling show. Six people with Asian backgrounds told their family stories. How their ancestors came to Australia and how their family integrated into the Australian society. They told what being an Aussie with an Asian background means to them.

It was a very interesting show and Lindy enjoyed it very much. She certainly did not need any audio description as each of the storytellers gave a very enlightening account. They even gave a description of some of the photos they showed.

When Lindy heard that one of the Triathlon World Cup races was to be held in Sydney, she wanted to be part of this exciting event. As Lindy was taking things easy, she decided to recruit a couple of vision-impaired athletes from the Achilles Running Club to compete as a team.

Charlie McConnell who had never swum more than 1km in Open Water did extremely well to stay afloat. Michael Levy not only got him through the 1km swim safely, he also gave a great commentary throughout the swim.

Lindy rode the tandem with Paul Archer. The 40km bike leg comprised 3 laps of a loop starting from Lady Macquarie’s Chair, then through the Cahill Expressway to Darling “Harper” then over the Harbour Bridge and back to Lady Macquarie’s Chair. Paul handled the tandem beautifully through the 11 U turns in the race! Lindy and Paul had a real buzz riding over the Harbour Bridge six times.

Our overseas visiting member, Kamilla Ryding did the 10km run guided by Brian O’Dea, Eamonn Kenihan, and the club president Ellis Janks. The spectators certainly noticed the Achilles colours during the run

Lindy is preparing for “Ride for Retina” in September. This will be a ride to raise funds and awareness for Retina Australia. It will start on Sunday 18th September on the Gold Coast and finish on Saturday 24th September, World Retina Day, at Manly.

I will keep you up to date in my next newsletter.

That’s about it from the Black Labrador.

Remember: Always look in the bright side of life