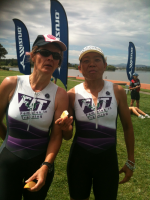 Spring has finally reached Canberra. If you didn’t get the September and October newsletters, don’t worry. Lindy has been busy training for the upcoming Canberra Half Ironman triathlon so she didn’t have time to type them up.

Since the August issue, I had a Queensland holiday, went to the School Girls Breakfast, attended the Spastic Centre “Emerge – Empowering Young Leaders Conference”, got my Mara-bone and Lindy started to compete in triathlon again.

I Got my Whole Mara-Bone

In the July issue, I told you the story about how I got my Half Mara-bone. I also told you how excited I was when I overheard Lindy’s plans to get me a Whole Mara-bone from Melbourne.

Well! Lindy was true to her word. She left for Melbourne on Saturday 9th October and I got the Whole Mara-bone handed to me the next day at the Carter’s resort. It was very yummy and I spent hours chewing it.

After having a nap, I started to look for Lindy. She was nowhere to be seen! When Amanda noticed that I was looking for Lindy, she told me that Lindy is still in Melbourne and will be back the next day.

I wonder how Lindy got the Mara-Bone to me so quickly. I read in the Harry Porter’s book that Witchery can transport special items through the chimney. But the Carter’s resort does not have a chimney. I am confused !!

Anyway, after Lindy got back from Melbourne, she told me how she got me the Mara-bone. To this day, she still has not disclosed how she transported that Mara-bone to me!

Michael, the bull dozer and Ellis, the Achilles president came down from Sydney to Melbourne to guide Lindy. They also recruited Andrew from Melbourne to ensure that they had all bases covered.

The Quad started the Marathon in the middle of the bunch. Michael and Andrew clearing the path and Ellis guiding Lindy on the strap. Throughout the race, the trio swapped around between guiding, clearing the path, refreshment stops as well as disappearing to the nearest comfort stops.

Lindy used the system of running 10 minutes and walk for 1 minute. This way, Lindy can hydrate and fuel up on a regular basis. The aim was to go out on a 6 minute per km pace and try to maintain the pace for as long as possible. Her overall aim was to go under 4 hours 30 minutes. To Lindy’s surprise, she went through the half marathon mark at 2 hour and 2 minutes, which is some 4 minute faster than the planned pace. It was also some 4 minutes faster than her Half Marathon result in May

She felt very good at that point. Her legs felt fine and her steps were not labouring. Her breathing was very easy. She was even told by her guides that she was talking too much. That is so uncharacteristic of Lindy!

They maintained that pace for the next 10 kilometres.  It was around the 32km mark that Lindy’s conversation slowed down. She said something about conserving energy. I think the pain in her legs made it harder for her to talk. Then again, what does a black Labrador Guide Dog know about pain from running. I generally sprint around the oval and only ever jog for a couple of kilometres at a time.

Although the last few kilometres were hard, the support from the crowd, especially from those FIT ladies who ran the shorter races earlier, helped push her on to Melbourne Cricket Ground. Lindy was so excited about finishing her first ever Marathon that she forgot to “look around” and soak up the atmosphere at the MCG.

The official finish time was 4 hours 10 minutes and 37 seconds which was some 3 seconds per kilometre under the planned pace.

Thanks must go to Michael, Andrew and Ellis for guiding her and giving her lots of encouragement along the way. More importantly, for putting up with her conversation throughout the run! You now get to appreciate what I have to put up with all the time!! It’s a dog’s life!

The Spastic Centre of NSW runs an Emerge – Empowering Young Leaders program to pair up young people with cerebral palsy and mentors from the business community. The mentors work with these young people for a year. They meet on a regular basis.  The aim is to help these young people to become future leaders of the community.

At the end of the program, the Spastic Centre puts on a conference and invites other young people with disability to attend as well. Lindy was honoured to be asked to speak at the Conference.

Lindy spoke on “Goal Setting to achieve one’s Life Dream”. The audience was very responsive. I even had trouble getting my usual dog nap in during the presentation. It was wonderful to see so many young people motivated and getting on with their lives despite their disability. The theme of “making the most of one’s ABILITY” was truly demonstrated.

As part of Lindy’s preparation for the Canberra Half Ironman Triathlon, Lindy entered into the Sri Chimnoy Sprint Distance Triathlon on the 30th October.  It was the first triathlon she had competed in since the World Masters Games 16 years ago.

In 1994, as Lindy’s eyesight was slowly deteriorating, Lindy found it harder and harder to continue with triathlons. She decided to make the Brisbane World Masters Games her swan song.

It was a great way to finish her triathlon career. For a poor swimmer, the swim was with the current. In fact the current was so strong that a few people nearly missed the swim exit! The ride was around the World Expo site and capped off with the run around the river foreshore.

Some 16 years later, Lindy once again put on the wet suit for the 500 meters swim. This time she had Rosemary to guide her. The pair had a strap around each of their waists and they were connected with a surfboard rope.  Rosemary swam on Lindy’s right side. If Lindy felt the rope tighten up, she needed to swim more to the right. If she got too close to Rosemary, she needed to swim more to the left. So it was like playing the pinball machine, go left! Go right! And so on… They had to swim parallel to each other otherwise the rope would get in the way of the arms. There goes the idea of Rosemary towing  Lindy through the swim!

They started at the back of the women’s wave. When they hit the cold patch on the lake some 50 metres out from the beach, Lindy had trouble exhaling with her head in the water. It took a bit of breaststroking to settle her breathing down. After being passed by two men’s waves, Lindy & Rosemary finally reached the beach.

The transition took so long that Rosemary was going to do her make-up while waiting for Lindy to get out of her wetsuit! What happened to just like ‘peeling off the banana skin’ method?

The 20km ride on the tandem was great. They passed over 50 bikes during the bike leg. Is it fair to count those bikes that had flat tyres?

The 5km run leg was a bit of a challenge. The pair didn’t expect a bush run on a single track. Lindy found it harder to get her footing on uneven ground as she can’t see the surface properly. It was topped off with a huge fallen tree across the track. At one stage, Rosemary thought she was guiding Lindy on the Kokoda Track!

After this race, Lindy certainly realized she needs a lot more open water swimming practice. Since that race, she has entered into the TACT  Aquathlon series as well as going to the FIT  Open Swim Training session.

On the 12th December, Lindy will compete in the Canberra Half Ironman Triathlon. It is a 1.9km swim, 92km cycle and 21.1km run and Lindy will be guided by Rosemary, Tracey and Jane. Look for the race info in the December newsletter.