Listen to Lindy being interviewed on radio in Hong Kong

Interview with Karen Koh and Noreen Mir, RTHK Radio 3, Hong Kong (duration 35 mins)
Noreen commented, “You came across super, and it was very special to hear about how you used your life lessons to motivate other people.” 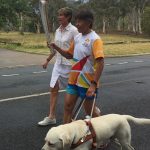 SBS World News feature on Lindy being selected as a wild card
to compete in the 2008 Beijing Paralympics (duration 2:26 mins)

SBS World News feature on Lindy’s preparation and training
prior to being selected for the 2008 Beijing Paralympics (duration 1:49 mins)

Interview with Lindy from the para-cycling camp in Perth before the 2008 Beijing Paralympics (duration 13:49 mins) (click on image to listen to interview) 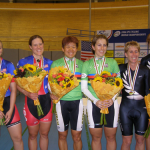 Radio 2SM interview with Lindy on the International Day of People
with a Disability before an event held at Martin Place, Sydney (duration 9:16 mins)

Listen to an Australia Day 2017 interview with Lindy in Cantonese

When visually impaired athlete Lindy Hou took a trip without her guide dog Harper, she didn’t know a trip to the bathroom would turn into quite the adventure.

Lindy Hou told this story at the Now Hear This ‘Holiday Tales’ at the National Film and Sound Archive in Canberra. Recorded by 666 ABC Canberra’s Mark Jennings and Johnboy Davidson. (duration 10 mins)

Lindy’s story in an interview in 2012