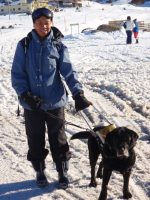 Lindy had been warned that the wind in Canberra would start in August and it certainly lived up to its reputation. The positive side is that the sun is waking up earlier each day and that means Lindy can see a bit more during her early morning runs. I don’t mind having a run now with Lindy in the mornings as long as I get to have a nap during the day.

August started with a W.A.R.M week in the snow, followed by the City to Surf “Fun” run. The rest of the month was filled with preparation for the Mara-bone in Melbourne, as well as meetings and lectures.

W.A.R.M Week in the Snow

Who else could dream up a name called ‘WARM Week’ in the snow, except the instructors from Guide Dogs NSW/ACT? The full title of the week is “Winter Alpine and Rural Mobility Week”.

When Lindy was invited to attend, she was worried about how cold it would be up in the snowfields. However, the weather turned out perfectly – record snow falls three days before we got there, and then sunny and calm while we were there.  I guess it was a warm week after all!

The purpose of the week was to provide clients of Guide Dogs NSW/ACT with an opportunity to experience traveling over different types of environment. The instructors showed Lindy and the seven other participants, different types of canes and techniques that are useful in rural travel.

The group tried out a new talking GPS system and we managed to navigate our way to the coffee shop. It certainly is a very important tool. Also, the humans in the group with limited vision, were taught how to use the sun to navigate through open rural areas. Mitch (my Labrador workmate) and I have our own unique way of navigating in open space, however we were not prepared to share this with our human handlers.

Lindy and the other vision impaired clients spent two mornings learning to cross-country ski. Their instructor Bruce gave them very helpful training and they were given an individual guide to ensure none of them get lost. Thanks to these guides, there were relatively few falls!

Mitch and I spent those two mornings hanging out at the bar. We had to turn down the many shouts that were offered, as we needed to be on duty for the rest of the day and couldn’t afford to be drunk on the job. We hope those humans recognize what we had to give up for them!

On the “snowshoes” day, I joined Lindy and the group, to snowshoe from Perisher to Smiggins. They couldn’t find any snowshoes to fit my paws, so I just walked with bare paws. It was fine until I decided to check out a tree off the main track. My paws sunk straight into the soft snow, so when I finally got to the tree, only part of my body and head was visible above the snow. I couldn’t lift my leg at all!!!

Lindy, with the help of the guides, built me a snowman and we posed for photos.

This year marked the 40th Anniversary of the Sun-Herald City to Surf. A record field of 80,000 people registered to take part in the 14km run from Sydney to Bondi Beach.

The first time Lindy ran in the City to Surf was in 1977. Lindy was able to see then and didn’t need a guide! She had entered with two of her schoolmates, Maureen Cummings and Alison Howell-Smith and the trio finished 3rd in the “School Girl Team” category!

Some 33 years later, Lindy fronted up to the start line with two of the Achilles runners as her guides, Michael Lovric and Daniel Barnett. As a Labrador Guide Dog, I was not suitable to guide Lindy in this race. I am vertically challenged. Those mad runners would not see me at all or would keep on stepping on my tail.

Lindy and her guides started in the second last wave, just in front of the prams and strollers group! Their wave started so far behind the race leaders, that the race winners were announced while Lindy and her guides were still waiting at the start line. Thus all the runners around them were resigned to the fact that they wouldn’t get the line honors!

Once they started the race, Michael led the trio through the thousands of runners and walkers. Michael yelled from start to finish “Blind Runners coming through”. Most of the runners and walkers were very accommodating and opened up gaps so the trio could get through. On some occasions, the message was drowned out by I-Pods, bands playing music or plastic cups being stepped on around drink stations. Michael, (knick-named “the bulldozer”) was somehow able to carve a way through anyway.

Dan led Lindy with a wrist strap between them, from start to finish. He ensured Lindy followed closely behind Michael, slipping through narrow gaps in the crowd of runners, and managed to avoided all the “cateyes” and potholes in the road along the way.

The trio registered an official time of 82.5 minutes. This was a 15-minute improvement from last year. Michael did such a great job of making a bee-line down the middle of the road, that they only ran an extra 200 meters over the official race distance of 14 kilometers. Very Special Thanks must go to Michael and Dan for making sure Lindy got to the finish line safely.

At the end of the event, Lindy was rewarded with a yummy lunch at the Coogee Bay Hotel and I had a holiday in Canberra at Andrea’s family resort.

Watch out next issue for the Melbourne Mara-bone preparation update

Remember: “Enjoy your achievements, especially the journey along the way”