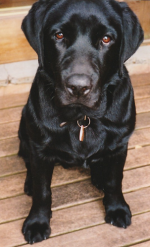 Lindy was worrying about how she would cope with her first Canberra winter. My Labrador approach is that when it is cold just stay in bed until the day warms up. Lindy however, gets up and trains even when the temperature is sub zero! I just don’t understand the human mind.

In the last three months, Lindy has participated in the MS Mega Swim, ran the Canberra Half Marathon, went to the FIT Running Camp, had a heart procedure to correct an Atrial Fibulation problem and has been training hard for the City to Surf.

Inside this issue, I will fill you in with all the news from May and June as well!

MS Mega Swim on the 1st and 2nd May

Lindy and her 22 club mates from Female in Training (FIT) were one of over 20 teams participating in the 24 hour MS Mega Swim at the AIS Swimming Pool.

The team raised nearly $9,000. Thank you so much to all who donated to this wonderful cause.

Early in February, I overheard Lindy telling a friend that she was going to get me half a Mara-bone. Well, she actually said a Half  Marathon, but being a smart Guide Dog, I knew she really meant a Half Mara-bone.

It must have been some project. She started to plan how to get this bone, and even had a program to do it. She said she had to get running fit, so started running with President Di on Tuesday and Saturday mornings. I offered to guide her but she said the doggie intervals between trees were not what she needed.

I was not going to lend President Di my harness, as I am really possessive about it! So Di resorted to using a rope with two loops.  They started with some short slow runs until Lindy gained confidence to go quicker.

Lindy eventually got enough confidence to run on her own. The bike path near home has a white line in the middle of the path that she can just make out and she only had one spill in the 3 months of training!

I did help her out when she did intervals on the soccer field. She ran back and forwards between the goal posts every 40 seconds. I turned early, as a Labrador knows how to save energy.

Although I didn’t join Lindy and the FIT ladies for the Saturday morning runs, I heard reports from my friends around Canberra. My Giraffe friend saw them taking a short cut near the Zoo and abseiling down some rock face using tree branches as rope. After that incident, Lindy not only was guided with a rope, she also followed other FIT members to ensure no more short cuts! Thanks Penny, Sue, Julianne, Natalie, Michelle and many more for making sure Lindy got back from the run each time.

Di and Lindy had a great plan for the Half Mara-bone, but Di’s leg gave her problems 2 weeks out from the Mara-bone day. Running coach, Jane Gray ‘came to our aid’ and guided Lindy on the big day.

On the 2nd of May, Lindy got up at 5am to get ready. I knew that day must have been important as she left wearing a sign “Blind Runner” on her running singlet.

Lindy didn’t have her best day, but she was able to get me that half Mara-bone. She had plenty of encouragement from the FIT members who kept popping up at each corner. Jane not only guided Lindy to get that bone, she also gave her a scenic tour of Canberra by describing the sights along the way.

She came home with that great big Mara-bone. I spent the afternoon in the backyard chewing my bone while Lindy had a bath and lay in front of the TV.

I know I am the luckiest Guide Dog in Canberra. Who else would have gone to that much trouble to get their Guide Dog that Mara-bone! I just heard that she is going to Melbourne to get me a whole Mara-bone later on this year.

I went away to the Sports and Recreation Camp near Berry down the South Coast with the FIT ladies in the middle of May.

The coach ride down on Friday evening was a bit scary. We came upon the tragic bus accident going down one of the steep mountains. Our driver used his incredible skill to turn the coach around.

On Saturday and Sunday mornings, I stayed in bed when the others went for the morning runs. I got up in time for breakfast. I totally enjoyed the yoga sessions, as the soft music was perfect to snooze to.

Lindy also did the rope climbing session run by the Sports and recreation staff. She found herself in some awkward situations although with the verbal assistance from the others, she managed to climb up some rock walls. I was happy to watch, as I cannot see any sense in working up a sweat to climb up a wall only to be lowered back down to the ground!

There was a running lecture filled with amazing footage of all different running styles. Coach Jane gave advice on the correct running form. I demonstrated while Sandy gave the lecture on Overtraining and Recovery.  You guessed right; I slept through it. Lindy gave a short session on “Mental Preparation for Sports” and it was well received.

The highlight of the camp was the trivial pursuit evening. Apart from answering the questions, each table also had to sing a song. I contributed to the team score by showing off my dance skills. It probably helped by having four paws to put in those amazing strange dance moves!

I certainly had a great camp and judging from the conversations I heard on the way back, everyone else did as well. I do look forward for more FIT camps.

Support the Achilles Running Club through the City  to Surf

In 1976, Dick Traum, an above the knee amputee, found himself approaching middle age and out of shape. After joining a local YMCA, Dick began running – small distances at first and then, eventually several miles. Within a year, Dick became the first amputee to run the New York City Marathon. The experience was life changing, bringing a powerful sense of achievement and self-esteem.

In 1983, seeking to provide that same opportunity to other people with disabilities, Dick created the Achilles Track Club, now called Achilles International. Today, this non-profit organization has chapters and members in over 70 countries. Lindy joined the Sydney club in 2009 and rediscovered how much she enjoys running.

You can find out more about the Sydney club through the following website: http://www.achilles-sydney.org.au/

Watch out for next issue in August about the W.A.R.M week down at the snow.

On this note don’t forget: “All Great Adventures begin with one small Step”