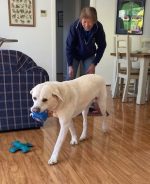 Thank you to all my Pawgust supporters. I certainly don’t have any issue with the lockdown in Canberra. I get lots of walks and attention with everyone working from home.

I make sure Lindy and Aunty Polly get their daily doses of caffeine in the morning. They like to support different coffee shops, while I get to read a variety of doggie mails on various routes.

In the afternoon, we go for a recreational walk to clock up the rest of my daily pawsteps.

All you wonderful supporters have helped me to raise nearly $2,000. I along with all my 4-legged friends from all over Australia have raised over $1.6 million. This will certainly help bring up the next generation of Guide Dogs.

Our donation site is still open until the end of September:

I had two weeks to recover from the Tokyo Olympic Games before the start of the Paralympic Fever. When the Olympic Games was on, the humans in my household have to choose between two TV channels. The Paralympics only show on one channel, thus save them making choices! The humans discovered Seven Plus on the computer shows each sport on the app, so they can watch the whole game or race! I heard from my kitty friends that their owners had more than five devices going in their house. Talk about dedication!

The wonderful part about the Paralympic Games is that it showcases all the athletes overcoming whatever challenges have occurred in their life and making the most of their abilities.

As Lindy said during her thank you speech on behalf of the Beijing Paralympians on the steps of Sydney Town Hall back in 2008: “We are no different to the able body athletes, we just have to work harder than they do.”

It is wonderful to see that the Paralympic Games has came a long way since the first one in 1960.

By the eleventh games, the Sydney Paralympic Games finally achieved parallel status to the Olympic Games in organisation, venues and being supported by thousands of volunteers. The Paralympic movement has grown even bigger and better since then.

While in Sydney spectators packed the stadiums, there was a dedicated traffic lane for Paralympic traffic and TV coverage started with one hour of highlights each evening, for Tokyo there has now been continuous TV coverage as well as live broadcasts through the internet. Although our Paralympians didn’t get a full stadium of spectators when they competed at Tokyo – mainly due to COVID – they certainly have much greater audiences from all over the world shouting and cheering for them.

Commentators on TV, live broadcast and radio have been doing a wonderful job through their commentating. They explained the sports, described the event and, more importantly, brought out the human sides of the athletes and their family.

Lindy went to a live Goal Ball game in Sydney 2000 and had no idea what happened through the game. It is a sport where the spectators have to be very quiet so that the blind players can hear the bell inside the goal ball. Her friends who went to that game with her weren’t allowed to talk during the game. All she could hear was a ball with a bell moving from one side of the court to the other, and back. When she heard cheering, then she knew someone had scored!

It is one sport that watching on TV with commentary is perfect. Actually, the family and friends of the players watching at home can cheer and yell as loud as they like and not interfere with the players!

Where would we be without Internet?

I heard on the radio that people used to use morse code, Flag semaphore and even smoke to communicate with others. My doggie friends and I still maintain our tradition of leaving doggie mails at lamp posts and tree trunks to save paper and inks. I have to use computer and emails to communicate to my human supporters, as they don’t have the skill to read my doggie mails!

During this lockdown, I have noticed that Lindy has used the following to connect with others: