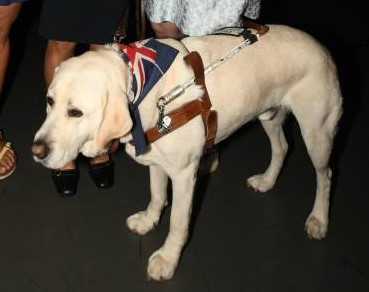 A quarter of the year has just passed by me. I often tell my fan club that I won’t spam their inbox with lots and lots of emails. So true to my word, I am finally publishing my first newsletter for the year!

Zodiac experts believe the Year of the Ox is a period when hard work will be rewarded even more than usual. This is the year to work towards a big life goal. Let’s work toward whatever we have always wanted to achieve. My goal is to master my new environment, learn new travel routes and meet many new neighbours. I know that, once I master the area around my home, Lindy and I along with Aunty Polly can have relaxed walks on the reserve next to our new home. I have already met many friendly four-legged neighbours. Oh! Their owners are ok as well, even though they don’t have tails to wag.

I am enjoying my new home and love sharing with Aunty Polly. I let Mum know when I hear the garage doors going up and rush to meet her.  Sometimes when I wake up in the night needing to go outside, Mum doesn’t wake up so I go and wake Aunty Polly next door.  I often use the carpet in her office room as a place to chill and relax, especially with my treat ball when Mum leaves me to go to weights.  Last week Mum and Aunty Polly were quite cross as I had opened a new pasta sauce jar and had a great time eating all the sauce while lying on the carpet in her office. Unfortunately a bit of sauce made a mess on the carpet.  I promise to try not to steal food but I can’t help it when it’s left out on the side and no-one is around.

I took Lindy’s family Louisa, Romeo and Eloise to Bathurst for Australia Day. It certainly was a jam-packed weekend. We got to Bathurst around 4pm on Sunday, and then caught up with Toireasa and her family over a swim and dinner. I was a bit disappointed that I wasn’t allowed to swim in the hotel pool, just lay by the banana chairs and got my tummy wet from the splashes.

The next morning we went through the Car museum guided by Geoff & Elaine. We then had lunch with Mayor Bobby and another councillor. After lunch, Janelle and her daughter gave us an educational tour of the Australian Fossil Museum and following that we checked out the Bathurst Rail Museum on our own. In the evening, we went to the Fun fair at the Bathurst Showground. The highlight for me was going up on the ferris wheel with the family.

On Tuesday, Australia Day, we got up early and drove around the Bathurst Race Circuit listening to an app that described the circuit. It was the first time that Lindy actually went around the circuit in a vehicle and had the course and scenery described by a race car driver. Lindy and Toireasa had ridden up to the Mount a couple of times in the reverse direction. They never actually rode the full race lap on their tandem throughout the many weekends that Lindy trained in Bathurst between 2004 and 2008. After doing a few laps with the app, the family went into town for the Australia Day events. 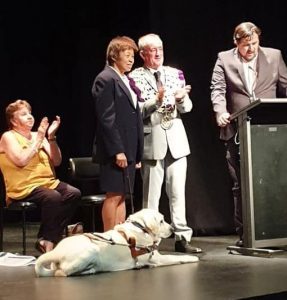 I (actually Lindy) gave a short address to welcome all the new Australians who took up their citizenship in the Bathurst region.

In the afternoon, the awards ceremony took place at the Town Hall. Here I am hard at work listening intently.

The two ladies who have been part of Lindy’s Paralympic success both live around Bathurst and were there at the ceremony. The trio – Janelle Lindsay, Toireasa Gallagher and Lindy – together won one Gold, three Silvers and two Bronze medals for Australia in the 2004 & 2008 Paralympic Games. This was the first time in many years that the trio got together. Toireasa & Janelle are both Bathurst locals, which made this reunion even more special. Although I wasn’t born when all the hype happened for the Paralympic Games, I am even excited for them.

With the encouragement of Mayor Bobby, Lindy couldn’t resist asking Janelle and Toireasa to go up onto the stage while she was giving her Australia Day address. She even put them both on the spot by giving them the microphone. They were both quick on their feet and gave their very lovely Australia Day message with absolutely no preparation. The media training they received leading up to the Paralympic Games was certainly useful.

After stopping for lunch at Perthville, I enjoyed a lovely sleep in the car all the way back to Canberra.

“Let’s all PAWS it forward with our generosity”

This is the tail of Lindy’s Comet.