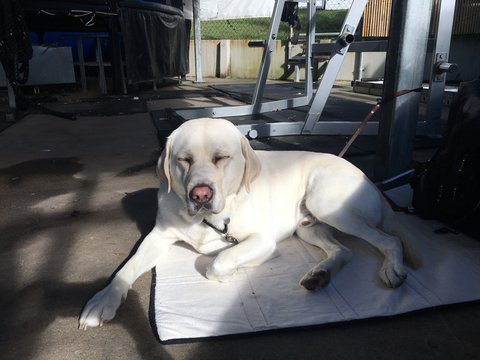 The significant events in April, May and June were:

– speaking to diverse groups including government employees, para athletes, high school students and seniors;
– attending the Round Table Conference in Brisbane on information access for people with print disabilities;
– competing in on- and off-water rowing events;
– helping to organise a very successful Fitability Fundraising Trivia Night;
– riding the tandem in the Five Peaks Challenge and competed in the Gunning two-day vets event;
– attending several musicals: ‘Love Labour and Lust’, ‘The Miser’ and ‘Barbara and the Camp Dogs’; and …

the most important one is that I have been learning to take Lindy around Belconnen Mall without getting lost.

Lindy and I spoke to the staff at ASIO a couple of weeks ago on Diversity and Inclusion. She concluded her talk by saying:
‘It would be a wonderful world when we see people’s ability rather than their disability;
when we put perception aside and see people as they are; and
when we no longer have to talk about discriminations about age, gender, culture background, sexual preferences and so on, because society has fully embraced inclusion.’

Lindy did the talking while I prompted her through my ZZZZ on the stage. We believe that, through acceptance and understanding of our diversity, we will have a much more inclusive world. It was a wonderful audience to speak to as ASIO has already taken giant steps toward inclusion while embracing diversity through their various networks.

The best part about the event was the lunch afterwards where I was able to take my uniform off for a little while to say hello to those staff members in the lunch room. Lindy gave everyone ‘food’ for thought when she challenged everyone to be a leader through their action. When it came to the question of what is the politically correct way to treat people who are a bit different to ourselves, the answer is to ‘just treat them the way we would like to be treated. We are all one human race with some differences.’

Round Table Conference in Brisbane

I flew with Lindy to Brisbane and caught up with my friend Dudley while attending the Round Table Conference at the Rydges hotel. The hotel organised special toilets for us in the car park where I met a few of my fellow workmates from all over Australia.

I knew that the conference was all about information access for people with print disabilities but I couldn’t work out why it was called the Round Table Conference. Then all was revealed as we walked into the Brisbane Conference room – it is because everyone sat around ‘Round Tables’!

This year’s theme was: ‘The Changing Landscape for Accessible Information’. Topics and workshops presented ranged from accessible publishing, education for schools and university, 3D mapping, accessible museum and much, much more.

For Lindy and I, the most interesting presentation was from Yuma Decaux, a vision impaired engineering student, who, along with Jake Dean, developed an app called ‘Astreos’. This enables users to move their phones around the night sky and use different senses to understand the location of planets, stars and comets. The app, the first of its kind, uses NASA’s Horizon system that tracks hundreds of thousands of objects in the sky, including satellites. Yuma commented that it is his mission to develop an app that would not just allow blind people to see the Universe but also enable sighted people to ‘see’ the universe.

We all listened in quietly in between morning and afternoon teas and lunches. I can’t wait until Lindy finishes typing this newsletter to have a go with this app. As at the beginning of May, the Astreos star-gazing app is still in beta phase. The website for more information on this app is http://www.astreos.space

It is mind boggling how much technology is out there to enable all people to access information. How come so many websites are not accessible for blind people? How come banks can’t develop an Eftpos machine that is accessible for blind people? Is it really that difficult or is it too much trouble to cater for everyone in the initial design? If only the mindset for inclusiveness was part of our everyday process, then there wouldn’t be extra time and cost for add-ons; it would simply be part of all design.

Lindy has been learning to row with the Capital Lakes Rowing Club for just over a year. When she goes to training on Sunday mornings, I get to walk along the lake while she rows. She did her first ever rowing race back in May with Mal. The pair finished the 4km Time Trial mid field after handicap time. They did the second Time Trial in June and improved their time by 22 seconds. At this rate, Lindy and Mal can potentially row the 4km in negative time after 55 races! That should happen after 11 years of five Winter Time Trials per year.

Confused? Don’t worry, that is the sort of maths I have to put up with being Lindy’s Guide Dog!

We should treat each other the way we would like to be treated.
After all, we are all creatures of the world with some differences.

This is the tail of Lindy’s Comet.