“Kung Hei Fat Choy!” Happy Chinese New Year! It’s the year of the Rooster and I can’t wait until next year when it will be my turn – The Year of the Dog!

I spent the Chinese New Year’s Eve on Friday 27th January with Lindy and lots of her family. In fact there were over forty people, including over 15 children, five dogs and 1 cat! The cat spent most of the evening sitting on the garage roof watching the celebration. There were lots of food, drinks and happy chatters. It is a tradition for a Chinese family to get together on the Eve of Chinese New Year. They eat, celebrate and see the New Year in. I along with the other four-legged members of the family also enjoyed the extra treats and human company. The household was so full of life there was no need for the fire crackers to scare the bad spirits away! 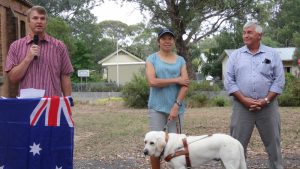 Australia Day in the Cabonne Shire Council
My second Australia Day Ambassador duty was spent in the Cabonne Council near the NSW town of Orange. Our chaperone Lynne, the Promotions and Tourism Officer of Cabonne Council, looked after us extremely well. She ensured that we got into our accommodation Wednesday afternoon and then saw us off on Friday morning. She was there every paw step along the way.

There are ten different events held in Cabonne Council each year. Three of the events are visited by the ambassador. They are rotated yearly so every village get a turn. This year we went to Mullion Creek, Cargo Village and Canowindra.

We were accompanied by the Mayor Ian Gosper and the Youth Ambassador. Lindy made her Australia Day address at each of the venues. Lucky she kept it short and told different stories, otherwise I would just snooze through them all! The people we met at these villages were wonderful; I was really humbled to hear the contributions that many of them have made to make Australia such a wonderful place to live. Yet all I have to do is to lead Lindy around and listen to her talk!!!

We stayed in a beautiful boutique bed and breakfast called Arancia. It was located 6km from Orange and has stunning panoramic views from the dining room and the bedroom. I had a little stroll in the yard and saw some really big dogs which for some reason everyone calls, “Cows”. Lindy was able to enjoy the quietness of the surrounding and I was able to enjoy the beauty of the place. We certainly have this teamwork down pat.

Here are some of the photos from the Day and also articles from the newspapers. 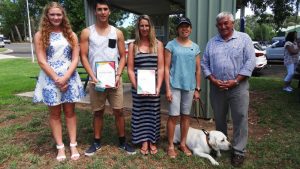 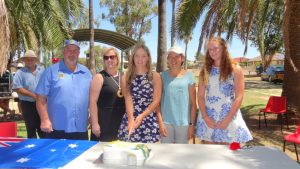 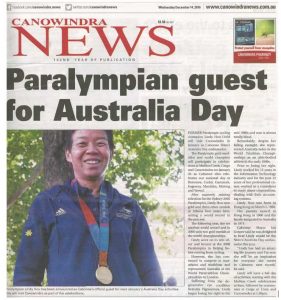 My last newsletter mentioned that Lindy was going to do the Half Marathon on the rowing Erg as a fundraiser for the HARTR8 FOR HARTLEY 2016. Instead of doing the challenge on a spin bike, Lindy and her team did it on the rowing machine.

The event was held at Deakin’s Fitness First. In the Cycle Spin Room over 30 people took part in this fundraising event. For this Challenge, six different instructors ran a 50-minute spin class with a 10-minute break in between classes. This was to ensure all the participants have varieties for their challenges as well as the opportunity for food and proper hydration.

The gym manager set up two rowing machines in the front of the room. Lindy rowed on one machine and her ‘Team’ took turns rowing on the second machine. Lindy aimed to row the Half Marathon distance of 21.1km as fast as possible. Instead of taking breaks between instructors, Lindy took a short drink break every 10 minutes. The ‘Team” did the Half Marathon as a relay as well as taking turns calling out the numbers on the monitor so that Lindy knew how long she has been going, what speed and pace she was rowing and how far she had rowed.

The ‘Team” had it all figured out… But they didn’t count on the fact that the lights were turned off and the music was very loud. They discovered that they were able to use the torch on the mobile phone to shine on the monitor. They took turns yelling out the numbers to Lindy. Half way into the marathon row, when the ‘Team” thought they had got on top of all the challenges, Lindy started to feel like she was rowing on water with the machine moving back and forth! She wasn’t too far off because, as the rowing machine sat on a solid floor instead of carpet where it normally resides in the gym, the sweat from the rowers caused the floor to be slippery. As the ‘Team” was there to handle all challenges, they went and carried weights from the weight room to stop the machines from moving. I guess that was why the event was named ‘Challenge’! I have to thanks the ‘Team” of Kerry, Fiona and Elaine for helping Lindy to get through her Half Marathon in 1 hour 41 minutes and 11.7 seconds. I think they were more exhausted than Lindy in holding the torch, yelling and carrying the weights. Oh! They finished the Half Marathon as a relay team well before Lindy did! Lindy’s Half Marathon was the easiest part of the challenge.

As a Guide Dog, I took on the more important duty of guarding the food and drink table outside the spin room.

There was a little write up about the Challenge in the Canberra Times: http://www.canberratimes.com.au/act-news/-gqii2k.html

“A small thing repeated routinely adds up over time to produce big results.”