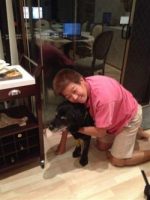 Thank you to everyone who sent me well wishes over the last few months.

I have fully recovered from the removal of my rugby ball sized tumor and the two subsequent operations. The only thing I have left to show for it is a little shaved patch on my side!

This month, Lindy went to London for the World Paratriathlon Championships, then Dubai, and all I got was a holiday in Canberra. Lindy gave me some excuse about quarantine rules to get back into Australia, so I did my research & found out that I would have had to go into quarantine for four weeks if I had gone with her. She was right; having a holiday in Canberra was definitely the better option.

Then again, if I’d have received an invite from the Queens’s Corgi …

After the World Championships in London, Lindy stopped over in Dubai for a week. She was interviewed on the Dubai Eye Radio; spoke to six different audiences ranging from an international school to the Young President Organisation; appeared in four newspaper articles; swam with a blind dolphin and even paddled with a dragon boat team. You can read more about all these further in this newsletter.

As I mentioned in my last newsletter, Lindy and her lifelong friend, Maureen Cummings, were going to compete in the World Paratriathlon Championships. I have to thank my fellow Guide Dog friends in Great Britain for passing me information so I can report on what Lindy and Maureen were up to.

Lindy and Maureen arrived in London on Monday evening, just four sleeps before their race.

I think I’m due for another holiday after hearing all that!

One of the most moving moments for both Lindy and Maureen was when they were given the honour of carrying the Australian Flag for the Opening Ceremony. Lindy commented to a reporter, “When Anne Gripper, CEO of Triathlon Australia announced our names during the team BBQ, I was shocked to hear it. Never in my wildest dreams would I have thought that we would be asked to carry the flag. I was really humbled to have been asked among so many well respected triathletes in the room. We certainly carried it with pride.” [View World Triathlon 2013 Photo Gallery]

Who would have thought that a friendship that began some 39 years ago would lead Lindy & Maureen to carrying the Australian flag onto the stage at Trafalgar Square!

The pair came 7th among the best female, vision-impaired triathletes in the world. The winner was a 22 year old from Great Britain. Maureen had not noticed anyone else in the race that might have been within 20 years of their age! So for a 53-year-old, Lindy did all right!

Lindy told me “The atmosphere in Hyde Park was tremendous. Fellow Aussies called out our names as well as many calls of ‘Go Aussie’ which kept us going all the way to the finish line.”

In the days after their race, Lindy and Maureen were able to cheer all their fellow Aussies on. The Elite Men and Women, as well as the Juniors, showcased the best in the world. The age group competitions were just as fierce, with the most inspiring competitors in their 80s! Wow! I thought I am old at 77 years (11 doggie years)!

Lindy would like to use my newsletter to thank the many people who helped her in her journey:

None of my Guide Dog reporters can give me a better description of the race than the following piece!

“Mind Over Matter” by Maureen Cummings

Have you ever been in a situation that frightened you? What helped you to get through the situation? How did you feel?

The tricky things in life that set our mind into a spin may make us sweat and can send our nervous system into overdrive which may enable us to fight or flight.

There we were at the World Triathlon Championships in the heart of London immersed in 16.5 degrees of chilly water. Lindy (my blind friend), who is not a strong swimmer and struggles in cold, open water swims was trying her hardest. Her mental toughness was set to play like never before. She kept calm, and keeping myself as warm as possible, we made it to land. I was so proud of Lindy. Her toughest leg was over.

Safely moving Lindy to the transition area but having to deal with the handlers of amputees who ran into us twice, made for flickering glimpses of uncertainty. With a lot of communication, we made it to the tandem bike.

Cycling amongst 40 tandem bikes and approximately 180 single bikes on three, 7km laps in the pouring rain with no less than 8 speed humps, an “s” bend and two u-turns, made for an interesting bike leg. I remember saying “Lindy, our job is to stay upright today. Time is irrelevant”.

I know how I was feeling, but imagine how Lindy was feeling, unable to see and placing her safety in my nervous hands.

If you find yourself in a difficult situation to make progress or even survive the predicament, keeping a positive mindset is essential. That is not always easy to do, particularly in the pouring rain whilst on a bike in a World Paratriathlon where my decision making, skill and experience will allow my disabled friend and me to survive the ride. Some didn’t finish and there were falls and injuries sustained. It was very stressful at times, so remaining focused was critical to us & important for me to stay in control of the situation. I can tell you, I was scared at times!

As we took our feet out of our shoes in the last 100m of the cycle, a huge sigh of relief came over me! The trickiest part of the race was over.

Upon entering the run section of the race, an official called out “Australian women, this is your one and final warning, get that rope closer to each of you”. He was referring to the 30cm one with two hand holds we were linked to. I was surprised as the rules indicated we were allowed 1 and 1/2 metres. Without questioning (as that could lead to a yellow card), I quickly wound the rope around my hand and we were knuckle to knuckle balancing our running arm action like never before. To add to the moment we had an official join us on bike for the entire 5km run. Our experience and inner strength came into play as we tuned into “automatic” and ran without concern of being followed.

Finishing the event with a sprint in the final 100m allowed us both to soak up the atmosphere and know our minds had enabled our bodies to successfully complete a very tough race.

Your mind is so much tougher than your body. Open it up and let it take you to places you can explore!

On the way back to Australia, Lindy was able to spend a week in Dubai with Helen, Paul and Cecile, my puppy-raising family.

Although I was not there to guide her from London to Dubai, Lindy was well looked after by the cabin crew and the ground staff. She was even greeted with a wheelchair on the airbridge! It took a little while to get through to the ground staff that blind people need guiding – not wheeling!

Nearly two hours after landing and with much relief to my puppy family, Lindy finally emerged through the arrival door. After a quick stop at their home, it was off to radio station Dubai Eye, for an interview with Suzanne Radford on her health program.

The remaining days were a whirlwind, packed with talks and activities. Lindy spoke to a number of groups including the students at the Victoria International School of Sharjah; cyclists at the Cycle Hub; athletes and staff at Al Thiqah Club for the Handicapped, as well as speaking at the conference for the Austrade staff, where H.E. Pablo Kang (Australian Ambassador to the UAE & Qatar) met Lindy and tweeted her press articles and photo. (Hashtag – AusAmbUAE). Finally a dinner function for the Young President Organisation at Atlantis Hotel “The Palm”, where the guests listened to Lindy while sitting in the dark.

Helen, my Godmother, who sat through all of Lindy’s presentations commented, “Thanks Harper for bringing Lindy into our lives, we love her ‘go girl’ spirit. We kept up a very brisk pace during Lindy’s visit and gave her the opportunity to meet people (and dolphins) from a diverse range of communities here in the UAE. Everyone loved meeting her and they were inspired by her courage, determination and willingness to share her wisdom and joy of life. Usually with visitors we take them to see the sights but this time we met and mingled with the people and it was a delight. May I just add – Lindy paddled for an hour with the Sea Dragons and didn’t miss a beat. Extraordinary!”

““I was surprised at the number of questions they asked. It was an inspirational moment, even for us as grown-ups who have been working in this sector.” Between all those speaking engagements, Lindy joined the Revolution Cycle Night for a trip around Dubai Autodrome on her tandem bike. This was organized by Promoseven Sports Marketing. Lindy also swam in the Arabian Sea, ran on the beach with Cecile and paddled with Helen’s dragon boat team – the Dubai Sea Dragons. Oh! And she also managed to check out RAW Coffee (from a boutique Roastery in the UAE), eat lots and even experience the Dubai traffic.

One of the highlights for Lindy was meeting the blind dolphin, Ini, from the marine park at Atlantis Hotel “The Palm”. Lindy and Helen interacted with Ini in the water. Ini is able to do everything that any other dolphin can do. Sarah, the trainer uses touch to tell Ini what she wants her to do. I wonder if trying to dance Lindy into the deep water was one of her instructions!

By the time Lindy left Dubai, she had also appeared on page 2 and page 3 of ‘The National’ (one of the largest English newspapers in Dubai), as well as in the ‘7 Days’ and the ‘Gulf News’ newspapers. The links to the news articles are:

The people she met and touched during this week made her stay in Dubai even more fulfilling. I am glad in a very BIG way that I am responsible for creating this opportunity.

Thanks to Cecile and Isabelle for finding out about the Guide Dogs NSW/ACT Puppy Raising program and to Helen and Paul for agreeing to take me on. Who would have thought that helping a little black puppy more than 11 years ago to fulfill his dream of being a Guide Dog, would lead to all these experiences?

That’s about it for this month’s message from the fit, slim and handsome Black Labrador.

Remember: “Your mind is so much tougher than your body. Open it up and let it take you to places you can explore!”