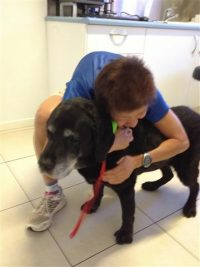 The reason I haven’t published the March and April newsletters is that I have been on sick leave since the 12th March. I am just about fully recovered and am now well enough to dictate this newsletter.

The story began … when I developed an itchy skin during my travel to Sunshine Coast earlier this year.

Lindy took me to the local vet up there to get some cream for my skin. During the examination, the vet found my stomach was a little tight. Further blood test, x-rays and ultra sounds discovered that I had a huge tumour in my stomach.

I was referred to the specialist clinic up on the Sunshine Coast. After consultation with Helen at Hall Vet in Canberra over the phone, Lindy decided to have the specialist operate on me the next evening. I hardly had time to catch my breath.

Neither Lindy nor I can remember the exact words that the specialist said before I went into theatre. Lindy was very upset after hearing what the prognosis. It went something like this –

I told her what I thought by the only way I know: by wagging my tail real hard and using my whole body to wag and generally bruising a few legs!

Aunty Maureen took pictures of us before the operation. Lindy was crying so much that she couldn’t look at the camera. I kept on dancing around to show them that all would be good and I would be ok.

I woke up about 7:30 pm that evening and heard the specialist telling Lindy on the phone that I am ok and that he had removed a tumour weighing 5.5 kg and the size of a rugby ball. I don’t ever remember eating a rugby ball among all the stuff that I put through my mouth!

Thankfully, the tumour is benign and I enjoyed my 11th birthday six days later (21st March).

Four weeks later I started to feel very uncomfortable and went and saw Auntie Vet Helen who advised Lindy that adhesions had formed in my stomach, and this was consistent with having such a large tumour removed.

Now here I am, four weeks after the second operation feeling good and I have regained my strength and am enjoying light duty. I am slimmer (trim and terrific) with lots more energy. Maybe carrying 15% less weight is the key to good health!

For those who would like to see the “Rugby ball” removed by the vet, please be warned not for small children. There are also photos of me before and after the operation on this link. You can see the difference.
[view Harper’s Photo Gallery]

Who would ever thought of a friendship that began some 39 years ago would take them to the World Paratriathlon Championships in London as Blind triathlete and guide team!

Lindy’s lifelong friend, Maureen Cummings, who Lindy sat next to in year 7 at school, is going to guide her at the World Championships in London.

Maureen was the one that got Lindy into triathlon back in 1989 when Lindy began to lose her sight and couldn’t continue to play hockey and squash.

Lindy learnt to swim, bought a road bike and competed in her first triathlon in Noosa.

Lindy trained hard and went onto represented Australia in the Age Group Team in 1991 and 1992. Few people knew that she was already sight impaired.

A few years later she was assessed as legally blind and her triathlon days were over so she Lindy being Lindy she took up tandem cycling. The rest most of you know.

Maureen was an elite triathlete in in the 80’s & 90’s representing Australia on several occasions and later won in 2000 won the World Championship for her age group, backing up again last year taking out Bronze in Auckland.

Although Maureen and Lindy are in their 50s, they believe that with the right preparation, they can be in the mix with the best in the World in London.

I cannot wait to report on their training progress leading up to the Worlds, it’s sooo exciting I am already wagging my tail. As a news reporter, there is nothing like a dog on the ball.

I played a very important part for this trek as I guided Lindy from Canberra to Sydney with a stopover in Parramatta. The trip included car, buses and train and minimum amount of walking! Lindy needed to save her legs for the real walk!

When Lindy and her team (Ellis, Peter and Julie) set out for the 50km Trek, I chilled, ate and slept in Coogee until it was time to greet them at the finish line the next morning. The team took 15 hours and 19 minutes to complete the 50km trek.

Thanks all the people who have supported them. They raised $2365 for the Fred Hollows Foundation.

That’s about it for this month’s message from the fit, slim and handsome Black Labrador.

Remember: “You are never too old to dream.”