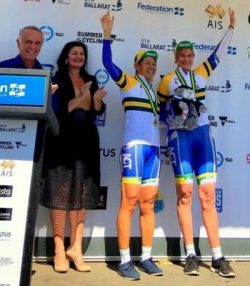 January 2018 went faster than my dinner at meal time!

Lindy and Kerry competed in the Para Road National Championships early in January. They came back with two more Gold medals. Apart from the Champion’s jersey and cap, I thought the owl they received was the best. It is wonderful that Cycling Australia has included Para in the National Road Program along with the elite cyclists. Every little step help toward inclusiveness.

I took Lindy to Sydney to attend the Guide Dogs NSW/ACT Peer Support Workshop. When I first heard about this program, I thought it was for Guide Dogs to provide support to other Guide Dogs. I figured out after an hour or so that it was only for humans to support each other. I met lots of my fellow Guide Dogs at the workshop. While the humans were busy learning how to help other vision impaired people, we took notes with our eyes closed.

The most exciting part of January was the Queen’s Baton Relay.

I had the honour of guiding Lindy during her 200m leg of the relay in Canberra. I wasn’t really sure what was happening last Thursday when Lindy put on this Queen’s Baton Relay uniform and she gave me an extra brush in the backyard. We got to our collection point, Southern Cross Yacht Club, and met Kerry there. There were lots of others who had the same uniform as Lindy in the meeting room. They were briefed with lots of information about the Baton, how to hold it, which side to face the front, how to pass to the next relay person, photo opportunities and lots more. I got totally lost with the information and thankfully Kerry was there to help me! Lindy proceeded to put my booties on, as she explained to me that it was 34 degrees outside and the road tar would be too hot for my paws. I did some practice walks in the meeting room while Kerry took some photos. I didn’t like the booties but as they say, ‘Mum always knows best’.

We went outside to get on the shuttle bus as we were greeted with many of our supporters. Then the sky opened up for about 5 minutes as we got into the bus. It cooled the road and air, yet many of our supporters got wet! We got dropped off at our designated relay start point and were greeted by our supporters once again. They managed to cover the 400m quicker than the bus. While we were waiting for the Baton to get to us, I picked up one of my paws to show Lindy that the booty was coming loose. Lindy felt the ground and said, “Ok not too hot, let’s get the booties off.” They were off in a flash and I gave her a big lick. In no time at all, Kerry said “the Baton is approaching”.

Kerry guided us onto the middle of the road, Baton arrived, Lindy took the Baton from Jack, turned the Baton around the right way, photo opportunity, and off we ran. Then a voice next to us said, “slow down, just walk”. Well, I could now take in the sights around us. Six policemen flanked us along the road. Our supporters followed us while we did the walk. Some of them even got a bit ahead to take photos and a video. We got to Matt, a vision impaired cyclist, and handed the Baton across – with help from Kerry of cause! Guide dog and cane wouldn’t have been able to help them do the handover. Once our job was done, we took photos with our supporters on the side of the road. Then we got whisked away back into another shuttle bus before I knew where I was!

I heard Lindy tell the reporter, “It was Awesome! It is a real honour to be one of the Baton Bearers.“

She was also quoted in the Canberra Times, “I just love the opportunity to be a part of this relay to be able to say well, hang on, we’re not different from anyone else,”

Thank you to Maureen for nominating Lindy, Kerry for helping me guide Lindy, and special thanks to our family and supporters who came out and cheered us on.