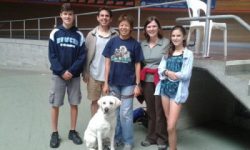 My first newsletter went out in March. Thank you so much for all your wonderful messages. Those encouragements and well wishes have given me confidence to continue to publish my newsletters. The new title of “Tails of Lindy’s Comet” will help me to establish my own identity. Of course, Harper will always be there in spirit. In fact, Lindy still finds Harper’s hair tucked up in all corners of the house!

Since the March newsletter I have been busy learning new routes with a couple of Guide Dogs instructors. I want to be able to take Lindy to many different places. One of the most important lessons was getting around the Canberra Airport. Lindy and I are going to fly to the Sunshine Coast at the end of this month to cheer the ACT Master Rowers on. I am really looking forward to this trip because we will stay with Coral and Graham who raise Guide Dog puppies for Guide Dogs Queensland. I can’t wait to play with the two puppies they are raising right now. They are sure to ask me all about what Guide Dogs school is like.

Lindy and her helper have been busy revamping Lindy’s website and setting up a new Facebook page. You can go into Lindy’s website to have a look. Once you are there, make sure you like her on Facebook and also subscribe to my tails. We will aim to put only important information and events on the Facebook post, so you won’t get too many postings from us. Just enough to know all the important happenings!

Lindy took me to a Comet talk a few weeks ago where I thought they were going to talk about me but they actually spoke about this Comet that is far, far away. It took Rosetta, the space ship, over 10 years to get there. Then Rosetta put down Philae, the landing craft on this Comet that is only a few kilometres wide. I started to lose interest in this talk when Uncle Wes explained to me that, “It is like a little flea who lives in the African jungle trying to land on me while I lay out in the backyard in Canberra.”

Wow, it must have taken the scientists from the European Space Agency lots of calculations to work that out. So far, no flea from the African jungle has managed to steal their formula so I am pretty safe. For those of you who would like to hear the recording of the talk, you can go to:
https://www.science.org.au/livestream?subject=Australian+Academy+of+Science&body=https%3A%2F%2Fwww.science.org.au%2Flivestream

In the last issue I mentioned that I will tell you a bit about my puppyhood. So here is a block from my puppyraising family.

Comet started his puppyraising on 19 May 2014 when he was picked up from Guide Dogs and brought to his new puppy home at Abbotsford in Sydney.

His first day involved exploring the backyard, meeting the family including Belle, the cat, who was only a few weeks older than him (aka Kittikat and ‘Trevor’). He then decided to nap in a box marked “cat’s toys only”. Clearly what was his was his, and what was hers was his too! 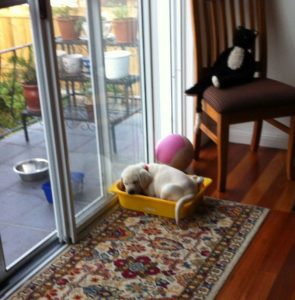 Comet on his first day in the cat’s toy box 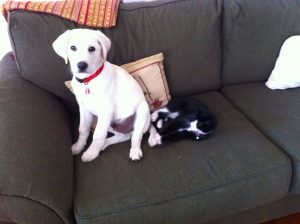 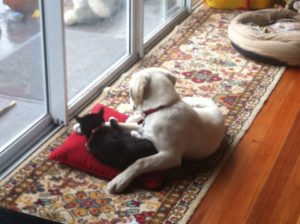 As Belle and Comet got to know each other better, they played games including ‘tails’. Comet liked to sidle up to her to sleep together and would put a paw on her so she would stay put and not wander off. At other times Belle would grab his face and groom him clean. Occasionally they would be found curled up together on the (forbidden to him) furniture but of course “she made me do it!”

Comet was a lively puppy – he liked to chew earphones, sunglasses, toilet brushes, thongs and the stair railing. He also thought beanbags were his best friends …until they broke. Fortunately that stage passed, and we could stop hiding our belongings and vacuuming styrofoam out of the garden. One time he ate 16 spicy Italian sausages which were defrosting on a bench which were supposed to be dinner… for us. He was a pretty happy dog that day!

Comet was a frequent and favoured visitor at the local public school at Abbotsford where his puppyraising kids went. The principal kindly supported his education by allowing him special leave to come into the school. He learned how to join the kids in the classroom without causing a ruckus, sit through assemblies and behave around lots of enthusiastic kids.

When he hit adolescence he was a bit naughty off lead. One day during some training we were walking past a friend’s place when she opened the door and said ‘Hello Comet’. He took that as an offer to bolt past her and make himself at home in her lounge room.

It was a lot of fun to raise Comet as a puppy and very rewarding that he made it through to being a guide dog. It was a very well supported program which helped us teach him some of the basic skills he needed. Raising Comet was a very positive experience for this puppyraising family. We are so glad that he is doing a good job and is living a fulfilling and happy life with Lindy.

Having a sleepover at his brother Chip’s house 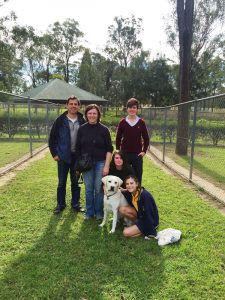 …and starting his guide dog training (middle front) with his siblings.

——-
The Power of Collective Efforts:
Each and every one of us is just a tidy fraction of the Universe
However, collectively we are the universe!