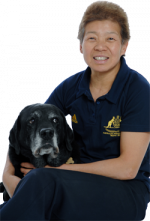 More about the Brain Swim workshop with Shane Gould.  Lindy was over the moon when she found out that her childhood hero Shane Gould was coming to Canberra to run a swimming clinic. After watching Lindy swim, I hope Shane can pull out some miracle! After all, Shane has won 3 Gold medals and held every freestyle swim world record from 50m to 1,500m at one stage of her career.

Being a ‘wise’ Guide Dog, I know Lindy is not going to break any swimming record, no matter how much effort she puts in. I just hope that she can improve her swimming so she won’t have waves of swimmers swim over the top of her like last year!

I took Lindy to the AIS swimming pool last Saturday and listened in for a bit. One of the most important thing that Shane pointed out was quality of the swim, technique and fitness are less important. The bit that I like the most was that Shane told Lindy, along with the other 13 Females in Training ladies, that they need to move naturally like humans used to do.

Wow, I am definitely on the right track. The Guide Dog School did not give us any swimming lesson as we all can swim naturally. Yet, I can boast that I am quite an accomplished swimmer. No Labrador has ever been able to swim over the top of me!

I didn’t stay awake to listen to all the rest of the lesson. I had to take the opportunity to have my doggie nap.

Whatever Shane was teaching, it certainly has helped Lindy. Since the swimming clinic, Lindy has been enjoying her swimming a lot more. She might not appear to swim any faster, but she certainly looks like she is working with the water rather than fighting with it. We will see the fruits of the seeds that Shane planned in the upcoming triathlon season.

It has certainly taken a bit of creative time management for a Black Labrador Guide Dog  to ‘take time out for a nap’ as the following is the schedule Lindy and I had to fulfill in the last two months!

18th to 24th September –Road Crew for Ride 4 Retina – a 982km cycle from the Gold Coast to Manly to raise money and awareness for Retina Australia.

30th  October – I spent all day chewing my bone while Lindy rode the 205km Fitzs Challenge with her pilot Ashley. It was a very hilly ride with over 3,800m of climbing. It took in just about every hill in Canberra!

6th November – celebrated the 15-year anniversary of the Achilles Running Club Sydney Chapter with my fellow Guide Dogs. The runners (humans) also joined in to recognise the friendship and achievements of the people and the club.

11th November – attended the opening of the exhibition by the World reknowned artist James Willabone. I quietly took care of the spillage by the caterer while Uncle John described the paintings to Lindy.

The above schedule does not include taking Lindy to the gym, running track, swimming pools and cycle venues so Lindy can do those crazy things called training and racing!